Continuing a legacy that began in the 1990s, McLaren has unveiled the 600LT, the lightest and most powerful model to join its Sports Series.

The legacy of the Longtail began in the 1990s when the McLaren F1 GTR swept to victory at Le Mans in the marque’s first attempt, and evolved into one of the most important race cars in modern motorsport history. The newest rendition of this racing legacy is the McLaren 600LT.

Inspired by the renowned McLaren 675LT model and its iconic ‘Longtail’ McLaren F1 GTR racing predecessor, the new addition to the LT family has all the physical hallmarks of a true McLaren ‘Longtail’, including an extended front splitter, lengthened rear diffuser, fixed rear wing and elongated silhouette – in this case by 74mm compared to a McLaren 570S Coupé.

The unique bodywork optimises aerodynamic performance, working in conjunction with the flat carbon fibre floor of the 600LT to produce the 100kg of downforce at 250km/h (155mph) that generates more grip and greater high-speed stability and is a significant contributor to the car’s excellence on a track.

The new McLaren 600LT epitomises the McLaren philosophy of producing lightweight super-sportscars that deliver extreme performance and are exceptionally rewarding to drive. With the engine management system of the 3.8-litre twin-turbocharged V8 recalibrated, and less back pressure from a top-exit exhaust system, which is even shorter and more extreme than that of the McLaren Senna, allowing the engine to breathe more freely, the 600LT can call on peak power of 592bhp at 7,500rpm and a maximum torque output of 620Nm  at 5,500-6,500rpm. 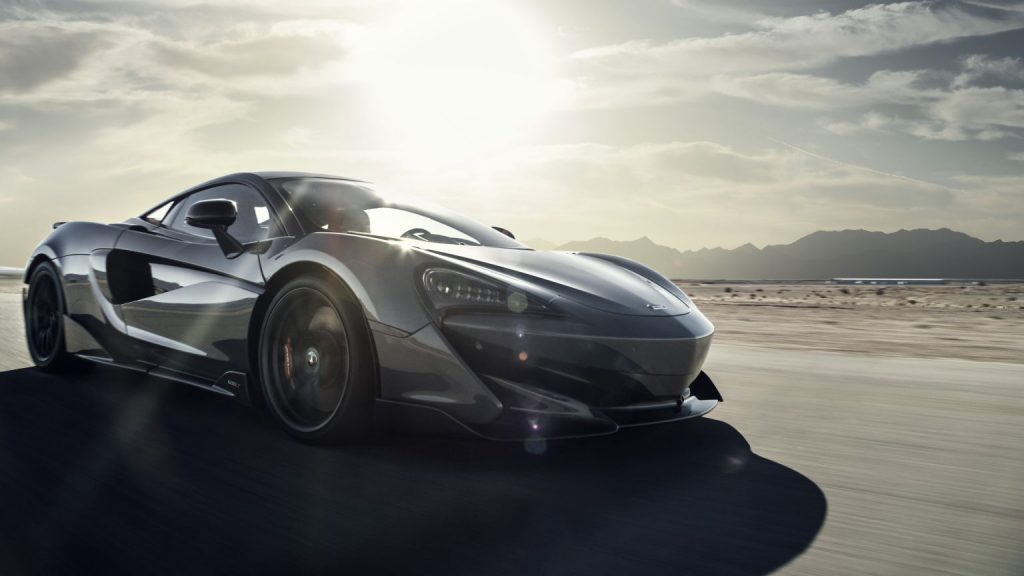 The remit of any McLaren ‘Longtail’ model is to engage and excite drivers to fully exploit the dynamic performance inherent in the car. To this end, the 600LT has lighter and stiffer suspension components from the McLaren 720S; the adoption of the forged aluminium double wishbones and uprights not only improves dynamic capability but also reduces weight by 10.2kg.

The independent, continuously variable adaptive dampers and front and rear anti-roll bars featuring on all McLaren Sports Series models have been retained but are significantly re-engineered to work with the new suspension geometry and create the track-focused performance demanded of the new 600LT.

The cockpit of the McLaren 600LT exemplifies both weight reduction and a driver-focused environment. Lightweight Alcantara trim material is used extensively throughout and the absence of carpet in the driver and passenger footwells and beneath the seats saves 5.7kg, while also exposing the carbon fibre beauty of the MonoCell II chassis construction. The glovebox has been removed and the door pockets replaced with lightweight nets; air-conditioning, satellite navigation and an audio system are all available as no-cost options, not being fitted as standard. Carbon fibre Racing Seats, first seen on the McLaren P1 and subsequently used in the McLaren 675LT, are standard-fit and save a remarkable 21kg.

Alpha Men Asia is the region's ultimate destination for today's modern gentlemen, covering everything from travel and style, to grooming, fashion, dating, wines and spirits, and the movers and shakers defining our scene.